What Are the Laws/Regulations for Testing in China?

Local laws and regulations require animal testing for cosmetic products sold in the country. "Non-specialized cosmetics produced in China could avoid toxicological testing after going through risk and safety checks," the China Food and Drug Administration said. The document indicated that China would gradually ease regulations on animal testing, which would allow more international firms opposed to animal testing to enter China's 134 billion yuan ($22 billion) cosmetics market. Current regulations require all cosmetics to go through a lengthy approval process known as "toxicological testing" which involves testing on animals like rabbits and guinea pigs.

The Human Society International has been working with China on being cruelty free. Initially the new rules will only apply to cosmetics manufactured in China. However, CFDA has stated that once the new system has been established, it may be expanded to include imported products and certain “special use” cosmetics as well. This would be a major step towards removing trade barriers between China and the EU, enabling cruelty-free companies worldwide to sell their products on the Chinese mainland without compromising their 'no animal testing' policies.

While animal testing is legal in approximately 80 percent of the world, including the United States, China is the only country where it is mandatory for all cosmetics and beauty products sold within its borders. 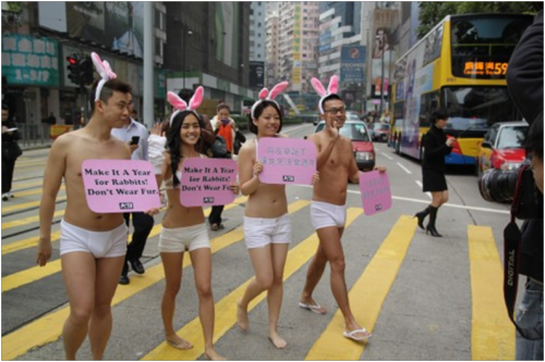 In an interview, Peter Li says this about how animals are treated in China: "China is the world’s biggest animal farming nation. Billions of farm animals are raised on the industrialized farms on the Chinese mainland. When I conducted a survey of China’s factory farms in 2005-2006, I saw a nationwide enthusiasm for Western farming practices such as gestation crates, battery cages, ear-clipping, beak-trimming, early weaning (for calves), castration, tail-docking (for pigs), and forced feeding (ducks and geese for weight gains and foie-gras production). While EU nations are phasing out such practices, China is massively employing them. The sheer number of farm animals in China suggests the world’s greatest number of farm animals are raised in welfare compromised farming conditions in China."
﻿Bear Farming﻿
Bear farming is arguably China’s most brutal operation.  In China today, some 10,000 Asiatic black bears, China’s state-protected species, are caged for life for extracting bile from their gallbladders through an open wound cut in their stomachs. This brutal surgery procedure often causes irreparable damage to their internal organs. Scientists have confirmed the many physical and mental traumas of bear farming. When Peter Li is asked about bear farming, he says: "My own visit to two bear farms added additional evidence to the cruelty of this farming operation. When I was visiting China’s biggest bear farm in Northeast China’s Heilongjiang Province, what I witnessed was humanity’s gross inhumanity to an intelligent nonhuman species. China will not be a part of the modern world if bear farming is not outlawed."

Fur Animals
In 2005, international animal protection groups exposed the shocking farming and slaughter practices on the fur animals. A recent video a Chinese animal protection group sent me showed the heart still beating in a raccoon dog skinned alive. While the Chinese government is trying to standardize slaughtering procedures, small farmers continue to use wooden sticks to beat the animals to death. But the eating of dogs is increasingly controversial, both among foreign visitors, but also among Chinese youth, some of whom, in 2011, made five rescues along highways where a total of 2,000 dogs had been bound for slaughterhouses. Peter Li responds to dog slaughter with: "...dog slaughter has long been a hugely offensive scene in China. It is often conducted on the side of the streets in broad view of young children and often conducted in front of other live dogs. Chinese activists continue to call for an end to its inhumanity and this totally uncivilized eating habit."

Here is a video showing how the dogs are treated and what they're used for in China. You can clearly see a change in culture from the US to China in how they value these animals.

Most of the people who support these acts in China are the older generation. This is the way they were raised and it's been said that Mao numbed them to feeling sympathy for their actions. Li agrees, saying: "People become indifferent or insensitive perhaps because they have been socialized to be so, particularly under Mao, when sympathy for the downtrodden, love of pets, wearing make-up, and displaying individual taste in fashion were all condemned as bourgeois and rebellious." Shockingly, China produces and consumes twice as much meat as the US. While Westerners greet each other by asking “how are you,” Chinese people traditionally greeted each other by saying ‘Have you eaten?’”

Such outdated method of research is unacceptable, especially considering that current statistics show 90% of drugs fail in clinical studies after accepted on animals. Animalsasia.org works day and night to save animals trapped in testing labs. Their 3 main campaigns are End Bear Bile Farming, Cat and Dog Welfare, and Zoos and Safari Parks. 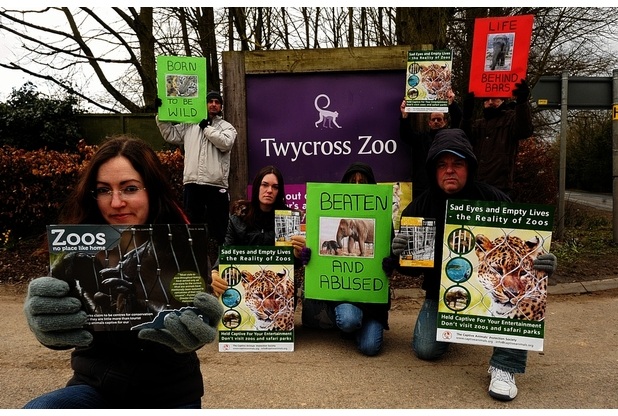 What's Next for China (regarding animal rights)?

Peter Li says China is at the bottom of the animal rights scale. "Look at the facts: Mainland China does not have a comprehensive animal protection law. Animal cruelty is not a punishable offense. China has the world’s largest number of animals in the industrialized farms. China’s continuing development model gives priority to productivity increase defined in terms of material gains. China’s pro-business politics has made societal voices for animal protection a nuisance to policy-makers and the business communities alike. The overall political environment is against activism for animal protection, certainly in the foreseeable future."

I think the impact on China is shown very clearly here. You can see the amount of animals that are specified in China that aren't particularly used in other countries, like the bears. I think because China is such an exporting and innovating country they feel they must keep up with the needs of the world. It's easiest and cheapest to test on animals for the ingredients for the products they make, so they continue to do it for more profit. This is also why they have farm animals raised only to be killed for these testings. It was even said by an expert that China will not be improving anytime soon with the current rate of cruelty.

It's clear that this is an economic impact more than a social or political. China's entire economy is based on the cruelty and testings done on these animals. There is obviously a social impact on the people who are speaking out in the images above, but the majority of the impact is on the economy and big companies. Even though Peter concludes that the future isn't too bright, he did also mention that the new generation has rejected using dogs for food products. This gives me hope to see the young getting involved and standing up for these animals. If they saw what was happening on the farms, they would probably fight against those abuses as well.

How does this compare to the United States?

The United States and China are pretty similar on their standings against cruelty. Both countries aren't too concerned with the well-being of these animals and continue to support testing. However, the testing for cosmetics has taken great strides and come very far for China since they got involved in the Cruelty Free International program. They made the goal for the summer of 2014 to make testing for cosmetics illegal. This is very exciting considering China was the only country to have laws requiring testing on animals. This also gives the country hope on progress in the future for banning all other kinds of animal cruelty. This says a lot about the new generation of adults- it says they care and they're willing to fight for things they believe in.