What Are the Laws/Regulations for Testing in the EU?

Animal testing is banned in the European Union! Here's a timeline of the long journey it took to be successful. (http://www.crueltyfreeinternational.org/en/the-solution/animal-testing-for-cosmetics-in-europe-finally-set-to-end)

1898 - The British Union for the Abolition of Vivisection (BUAV) was founded to campaign against all forms of animal testing1973 - The BUAV first brought the issue of cosmetics testing on animals to the public attention
1990 - The BUAV established the European Coalition to End Cosmetics Tests on Animals (now the European Coalition to End Animal Experiments – ECEAE) an alliance of leading European animal organisations formed for the purpose of ending animal tests for cosmetics in the EU
1991 - The BUAV and ECEAE organise an international march and rally in Brussels and an iconic, larger than life ‘laboratory rabbit’ Vanity tours countries across Europe to urge MEPs to vote to end animal tests for cosmetics
1996 - Anita Roddick, founder of The Body Shop, joined members of the BUAV, ECEAE, MEPs and Chrissie Hynde in presenting a petition containing 4 million signatures to the European Commission to end animal testing for cosmetics
2004 - A ban on animal testing of finished cosmetic products (but not ingredients) was imposed in Europe
2009 - Testing of cosmetic ingredients on animals anywhere in the EU is made illegal, as was selling or importing into the EU any animal tested ingredients to be used in cosmetics. However, three animal tests were made exempt in order to allow non-animal tests to be validated.
2011 - The BUAV and its European partners launch the No Cruel Cosmetics campaign to call for the import and sales ban to be implemented in 2013 as planned without delay or derogation.
2012 - The BUAV founds Cruelty Free International, the first organisation to campaign for a global ban on animal tests for consumer products. The Body Shop hosts our global pledge campaign in its stores worldwide.
11th March 2013 - A complete ban on animal testing for cosmetics is implemented in the EU. Since 11th March, no company can carry out new animal tests for cosmetics purposes outside of the EU for products to be sold in the EU. Cosmetics companies can, however, continue to sell in the EU products with ingredients that have been animal tested in the past. If a product has ingredients which have been animal tested after the date the ban came into effect, a company will not be able to market this in Europe, even if it sells the same product in other global markets. 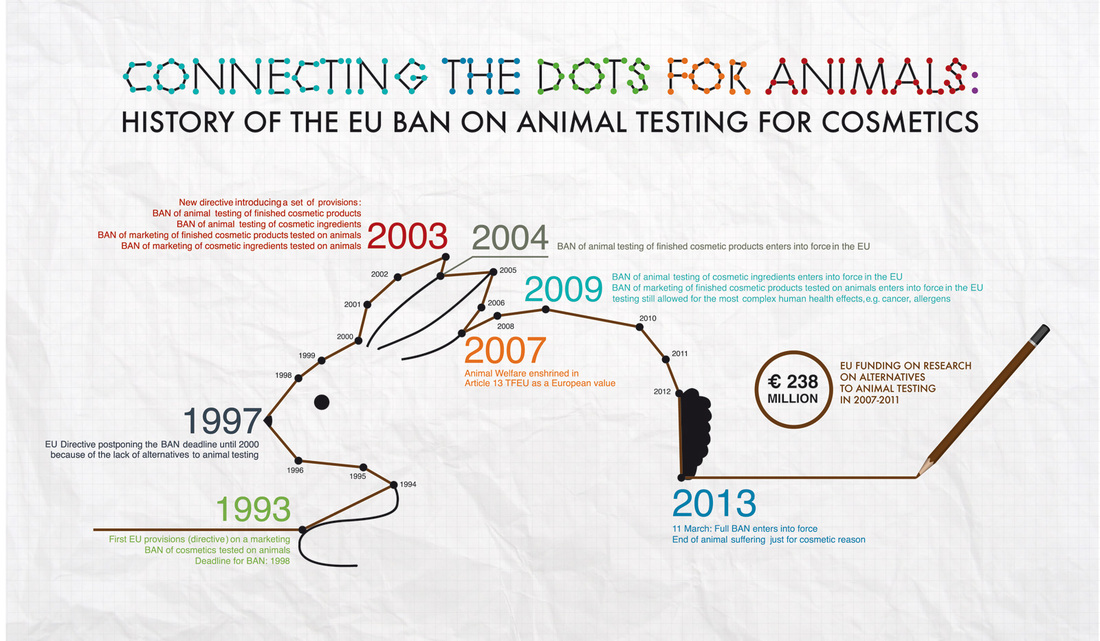 Impact on the European Union

The European Union has only had good come out of their ban on animal testing for cosmetics. The alternatives for the testings have been very successful and there haven't been any negative impacts on the economy. The companies have lost little to no money on the switch to alternatives as well. This shows a lot about the people and the power that the people have in these countries.  Compared to the United States, The United Kingdom, and China; the European Union is way ahead of the pack in banning tested products. I think it's really important for a place like the EU to ban animal testing because of all the countries it contains. If all of these people get together to fight for a cause, it will spread around the world. Now that China is joining the Cruelty Free Int. group, there's an even bigger influence to be spread.


As a member of a cruelty encouraging country, it's really important for places like this to set the example. Now we can use statistics and other information from their successful economies after banning and show our government the amazing influence it can have on our world. Ending animal cruelty/testing, even only in cosmetics, is a big step in the right direction that places like the EU can help us with.